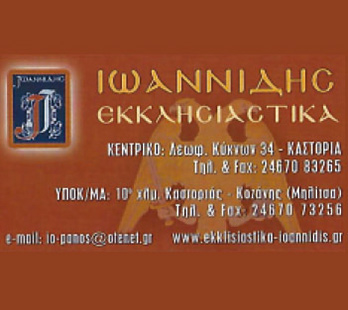 The route of the business, since its establishment in 1990 by John Ioannidis until today, where he gradually passes to the second generation, to Panagiotis Ioannidis, is essentially the story of a spiritual change. Some years ago the founder of the company had recognized the need to reward the Church with the meaning it found in her work. The relationship that he developed in offering to his activities, he also substituted his former livelihood. He traveled to the trade of ecclesiastical goods. The challenge became particularly demanding, as the body was inspired by the principles that the relationship created had inspired him. In practice, this meant a course that would ensure progress without, however, altering ourselves, simply turning ourselves into trading people. The key and measure of our success has been credibility. Over the years, we have been able to cover the whole range of needs of the Churches, as well as of the individuals of the wider Kastoria area, who honored us by choosing us. With these principles, we continue to have products that ensure that prices and values coincide.