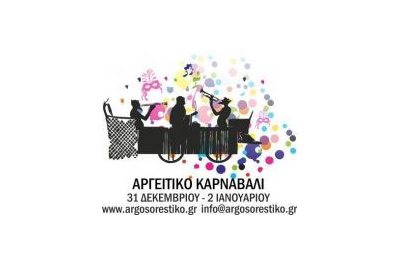 The New Year's Day for Argos Orestiko has a uniqueness. Three days before and after New Year's Day, the Argidians are disguised. Carnival does not take place in Halloween like all over Greece, but in the twelve days of Christmas and especially in New Year's Eve. This was also the custom of Western Macedonia since the Ottoman domination. During the twelve days of celebrations, the carnival of Kastoria, the "Ragoutsaria" that becomes the Lights and the Ai-Giannis is also included.

In the Argos Orestiko, the three-day feast begins from the afternoon of the New Year's Eve with the "bouloukia" dancing in the neighboring neighborhoods borrowed from the sounds of folk instruments. New Year's Day is the carnival parade with satyra (political and social), and the spectacle, the element of newer influences.
On the second day (January 2nd) the carnival is called "Paterica" and it is the day when the women dress up disguised.

In the New Year's Carnival it is easy to recognize the Dionysian element, since the cheerfulness of the masquerades is intensified by the wine. The old people tell us, however, that the custom dates back to the Ottoman rule. Because the Turkish lords banned night excursions and gatherings all year round, but were tolerant on Christmas and New Year's Day, the people of Argos "hroupistini" exploited the customs of the days to meet each other. They visited the houses of relatives and friends disguised, they sang, ate, ate and gathered tips. Especially for the years of the Macedonian struggle they say, disguised rebels exchanged messages with the inhabitants of Argos. The most popular disguise of men by tradition was to dress women.

The character of the Carnival Argos as it emerges from the central New Year's parade is mainly social and political satire. Thus, in the parade, one enjoys the representation of local social phenomena from tradition and contemporary life, the ridicule of the way of life of the Argos and the political work of their rulers. Many themes are drawn from political news, with the result that the parade takes the form of a political inspection. The intense, therefore, theatrical element in the rendering of their themes is played by the carnival companions, obeying at the same time the sounds of the folk instruments. The songs give me the rhythm in the footsteps and connected to the Argos Carnival is the "Eleven":