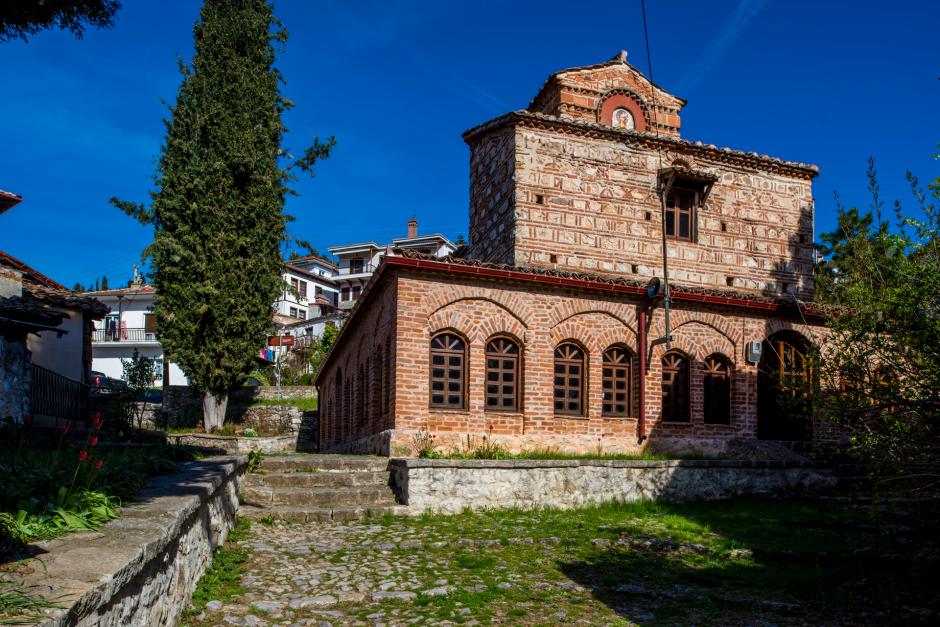 At the elevation between the two traditional districts of Kastoria with the mansions, Apozari and Doltso, is one of the oldest religious monuments of the Balkans, the Byzantine church of Agios Stefanos.

This is a small, three-aisled, vaulted basilica which seems that it was built in the middle of the 9th century. Its aisles are divided with pillars and are covered with semi-circular vaults. The middle one is particularly elevated and has windows, like a skylight, something that characterizes the basilicas of Kastoria from the Middle Byzantine period. On the east, at the conch, there is a rudimentary synthronon with the bishop’s throne, the only one in Kastoria. On the west there is a two-storey narthex, with stairs that leads to the second floor, the gynaikonitis, in which there is the small chapel of Agia Anna, the shrine, something that also can be seen only in this church. The portico on the northern and western side of the building is an addition that was made in the 20th century. The church’s masonry is characteristic of the monuments in Kastoria. It consists of rocks at their natural shape or heavily carved, surrounded by plaster, with tiles all around them, horizontally or vertically, and are alternated with compositions of tiles that create decorative letters or geometrical shapes.

The church is decorated with wall paintings that can be distinguished into three different periods. To the first, which dates from the end of the 9th – beginning of the 10th century, belong the wall paintings at the ground floor of the church and the narthex, as well as to some parts of the gynaikonitis. Special place among them have the scenes from the Second Coming at the narthex. From the second period mainly survive the wall paintings at the tall skylight, which according to their style they could date in the end of the 12th century and in the beginning of the 13th century. To the third period belong the numerous votive wall paintings, which are a special characteristic of the church. From these what stands out is the portrait at the narthex of the priest Theodoros Limniotis who provides a model of the church to Agios Stefanos.