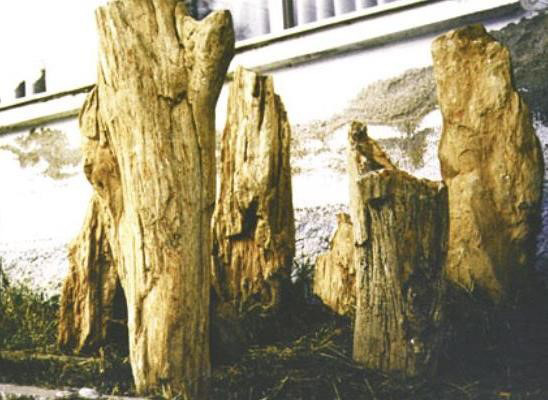 At the southern tip of the prefecture of Kastoria, in the settlement Nostimo is the petrified forest. This greatness of nature was created and evolved 20 million years ago, during the Miocene period. Because of climatic conditions and geomorphology at that time, forests were developed and there were also active volcanoes. The volcanic materials and the dust emanating from the volcano covered plants and animals causing their fossilization. In 1935 a resident of the area mining lignite discovered fossil logs and fossils. Excavations of the forest will begin about 60 years later and valuable finds will come to light.

Tropical and subtropical plants, petrified logs of palm trees, fossilized and fossilized fossils offer much information about the climatic conditions of that period.

Referring to some of the findings, we should note the petrified tooth that belonged to a very large prehistoric herbivorous animal and the tooth of a shark estimated to have a length of 20 and 25 μm. other tropical species, various marine organisms such as mussels, starfish, shells and many vertebrate species. The fossils define the area that today are mountains and mountain ranges as seaside, 20,000,000 years ago.

The geological forest is considered to be a preserved monument of nature with great value. For even more discoveries of this period, do not miss to visit the Palaeontology and Palaeontobacco Museum of Nostimo.