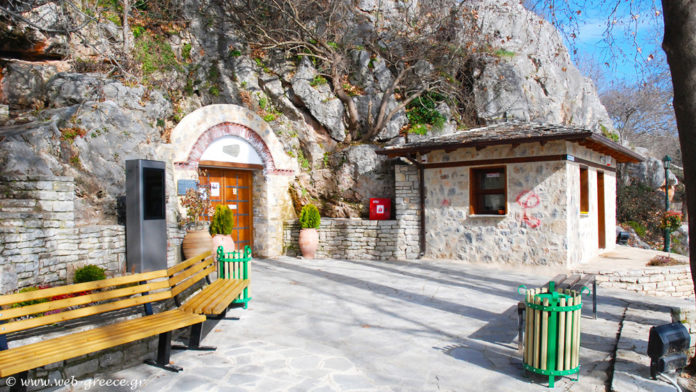 The cave is located on the northern side of the city just before the Monastery of Panagia Mavriotissa. The entrance is about twenty (20) meters from the shores of the lake and 14 meters from the road. Inside, there are large land and lake sections with impressive dappled decoration as it includes seven (7) underground lakes, ten (10) halls, five (5) corridors - tunnels. The largest chamber of the cave has dimensions of 45 × 17 meters with its central part elevated and the sides of it end up in lakes. The great lake of the deepest cave lies to the west. The temperature inside the Cave is constant at all times at 16-18 ° C, while the humidity reaches 90%.

Inside the Dragon Cave, palaeontological remains were found, most notably caves of cave or cave bear (Ursus Speleaus). This species lived in Europe during the Pleistocene and disappeared about 10,000 years ago. Its name is due to the fact that its fossil remains are located almost exclusively in caves, where it obviously lived for a longer period of time, as opposed to the brown bear that used the caves only during hibernation. It is estimated that the weight of the male animals was 400-500 kg and the females 200-250 kg. It was basically a herbivorous and occasionally sarcophagous animal.
It is important that all necessary measures have been taken to ensure the safety of the visitors and the interventions inside were done in such a way that the physical condition of the Cave is not affected.

It has a length of 300 m of natural path, while the visitor's exit is through an artificial tunnel 35 m. The natural beauty of the route is due to the rich stalactite and stalagmite decoration and the four lakes that we encounter. The visitor passes beautifully constructed bridges, two compact and one floating. The exit is through an artificial tunnel, which also operates as a museum space with informative material about the history, the myth, the phases of construction and exploitation of the cave and the caves all around Greece, in the context of an effort to sensitize visitors for these "Monuments of nature". Now the 25-minute route can be done through an audio guide, translated into 10 languages and recorded in 7 (Greek, English, French, Russian, Hebrew, German and Chinese), greatly facilitating foreign visitors.