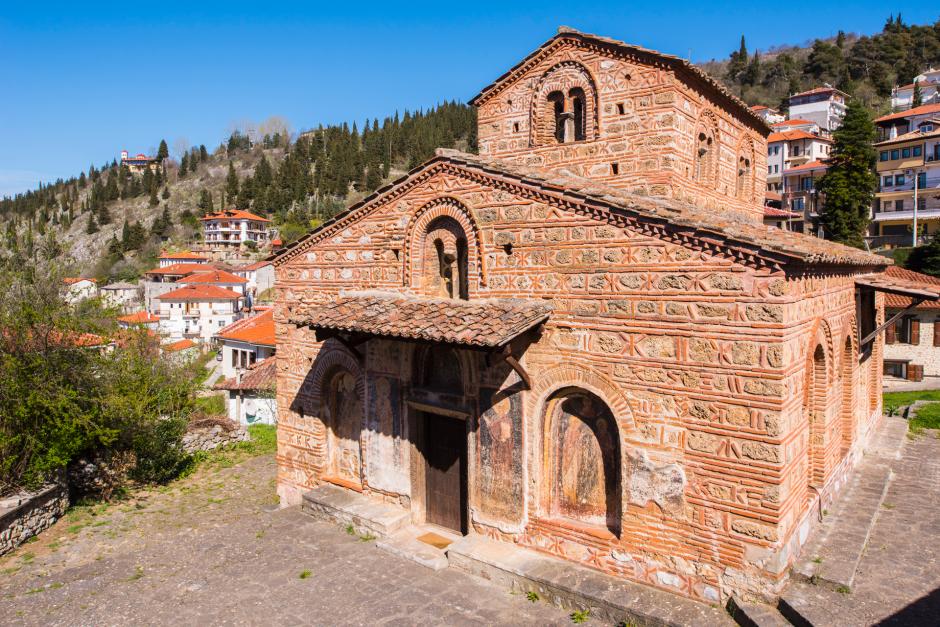 Near the district of Apozari, at the steep slope of the northern of Kastoria, is the impressive church of Agioi Anargyroi, one of the largest and oldest Byzantine churches of the city, which stands out due to its unique decoration.

It was built probably in the beginning of the 11th century, the period that is when Kastoria was occupied by the Bulgarians. Regarding the history of the church, information is provided by the inscriptions that mention its founders and the date of its renovation. According to these, Theodoros Limniotis and his wife Anna Radini renovated the church, which suffered a lot of damages through time; they dedicated the church to Agioi Anargyroi for the physical and intellectual health and salvation of themselves and their children, and funded the new icons that were made.

It is a three-aisled, vaulted basilica with a narthex on the western side. The aisles are divided with walls that have arched openings and the middle one is elevated with windows. Creating a skyline, like all the basilicas of Kastoria from the Middle Byzantine period. In addition, characteristic of the monuments of the city is the masonry of the church. Is consists of rocks at their natural size or heavily carved, surrounded by plaster, with tiles framing them horizontally or vertically and are alternated with tiles that create decorative letters or geometrical shapes.

At its interior the church is the only one in Kastoria that has rich marble sculpted decoration and impressive marble screen, from which only fragments survive. It was richly decorated with wall paintings that can be distinguished into two periods. Most of them date from the beginning of the 11th century and survive in fragments at the narthex, where the figures of agios Vasileios, agios Nikolaos, Agios Konstantinos and Agia Eleni stand out, as well as of the deceased Constanine. The wall paintings of the second period date from the years 1170-1180 and these include the depiction of the founder Theodoros Limniotis and his wife Anna Radini and their son Ioannis, with Virgin Mary in the middle. To the same period belong the few wall paintings that still survive at the façade of the church.