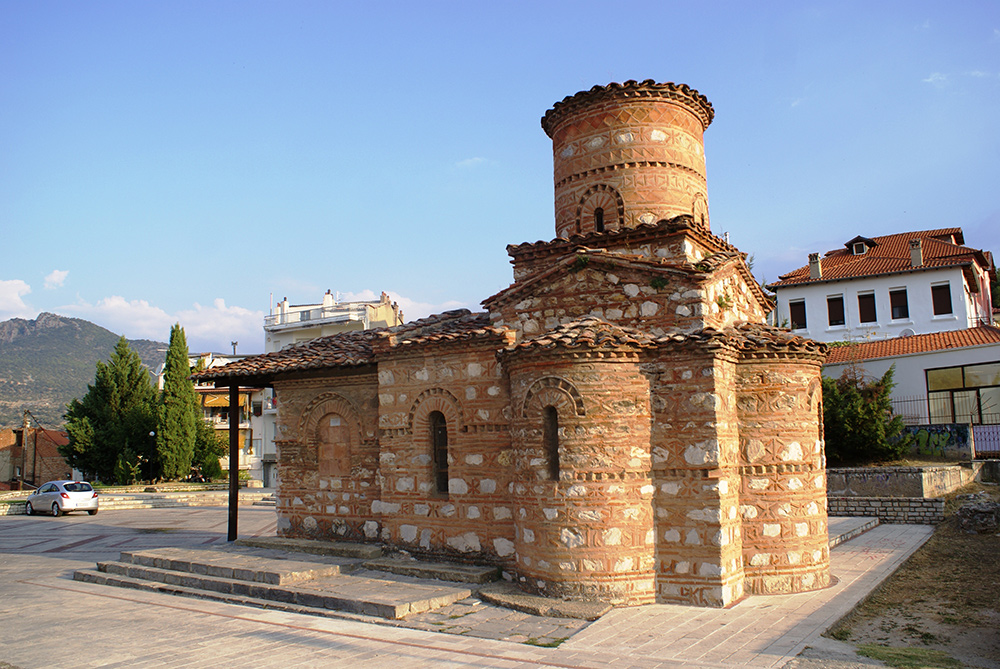 At the acropolis of the Byzantine castle of Kastoria one of the most famous and most remarkable monuments of Macedonia, the sacred temple of PanSaint Kastriotissa or Koumbelikidis, emblem and real jewelery of the city. It was named Kastriotissa in the Byzantine era, as it appears from an inscription that existed at the base of its dome because it was very close to the walls of the castle. It is more known, however, as Koumbelidiki, a name that prevailed during the Ottoman rule (ca. 1383-1912) and derives from the Turkish word "koumpes", meaning a dome, because it was the only church of Kastoria that had a dome.

The temple probably dates back to the middle of the 9th century, although other views on its dating were made in the middle of the 10th and the first half of the 11th century. During the Greek-Italian War (1940-1941) a large part of his dome was destroyed by bombardment, and in 1949 the monument was restored and returned to its original form.

Architecturally, the temple is the only one in Kastoria that belongs to the square triangle type. Its plan is square and its three sides, the east, the north and the south, end in niches. The square is covered with a circular dome, disproportionately high in relation to the volume of the building. To the west there is an elongated splint, and a large exarchate that was added in the 15th century. Of particular interest is the formation of the exterior surfaces of the church, which is characteristic of the Byzantine architecture of Kastoria. The walls are made of stones in their natural shape or roughly chipped, framed with plinths, horizontally or vertically. Between them there are briquettes that form decorative letters or geometric shapes and special toothed bands, while the ensemble is enriched with brightened glazed colored squares, squares, rectangles, triangles or in the shape of a diamond.

The inside of the temple, as well as the outer west side, are framed with remarkable frescoes, but they have suffered a lot of damage from the humidity. In the main church are saved scenes from the life of Christ (the Dodecar) and saints, and in the narthex are depicted episodes from the life of the Virgin Mary. Of particular interest is the depiction of the Holy Trinity in the narthex arch, which is one of the oldest Byzantine examples of anthropomorphic Holy Trinity, with the oversized God Father sitting in a bow and in front of His breast, Christ the Son, holding the Pentecost of the Holy Spirit surrounded by glory. These frescoes date back to the middle of the 13th century, while those in the exonarth are dating back to the 17th century. The illustration on the western outer wall of the church is later and, as the relevant inscription informs us, it was at the expense of an Andronikos in 1496.